M & M Theatre Productions came into school and performed The Jungle Book for the children in school. They then worked with Year 5 children on all the different aspects behind the scenes including: staging, lighting, sound effects, make-up and costumes and writing the play. 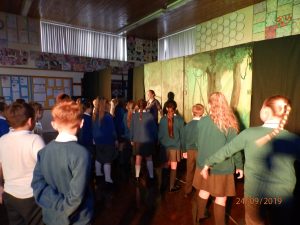 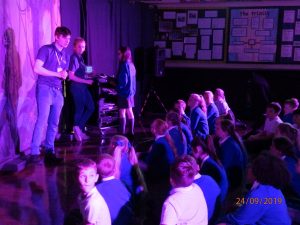 This year for arts week we focused, once again, on self portraits but this time with a photography base. Every child in school produced a self portrait, most of which are displayed in the school hall.

Nursery and reception produced layered self portraits using photos of themselves.

Year 1 also had their pictures taken but from the side. These were then cut out and stuck onto an abstract background that the children had produced. 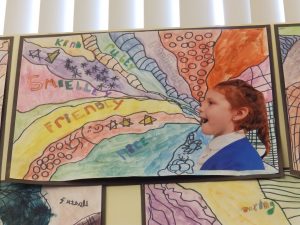 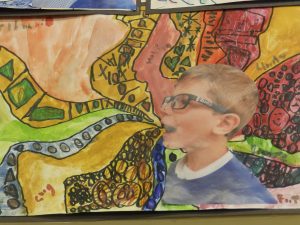 Year 2 children again produced an abstract background but they stuck pictures of their hands onto the background. 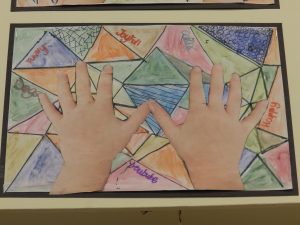 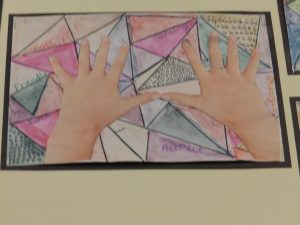 In year 3 the children drew a picture of their own eye from a close up photograph that had been taken. 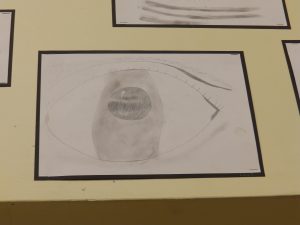 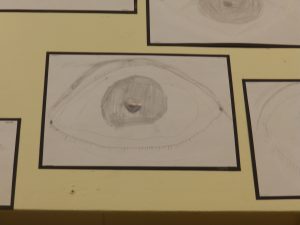 Year 4 children posed for a picture and then from that photograph drew the pictures of themselves into a pre-printed frame. 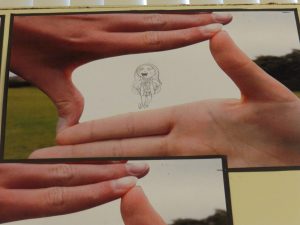 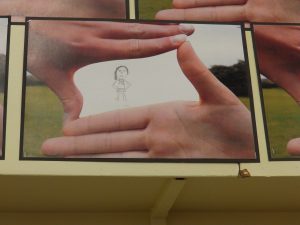 The year 5 children had their photographs taken through a glass sphere and then had to draw what they could see onto a pre-printed background. 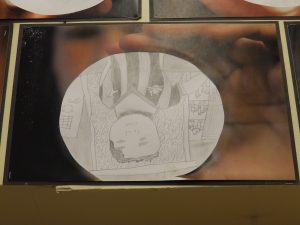 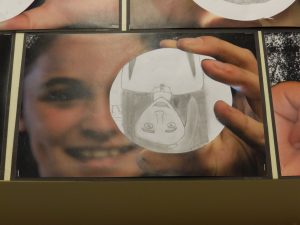 Key stage 1 produced 2 different pieces of work. One were they drew a single line and then used pastels to colour the spaces and another where they used three colours in a repeating pattern to produce some fabulous pieces of art. 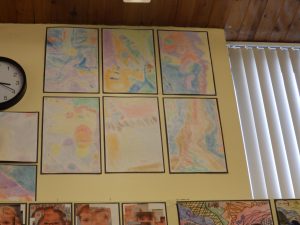 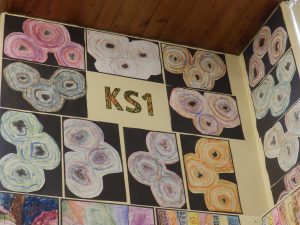 In Key Stage 2 there were 4 different activities for the children to try, all involving drawing lines. 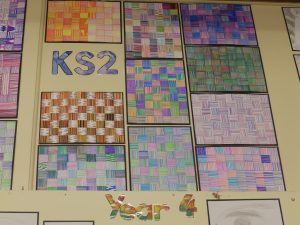 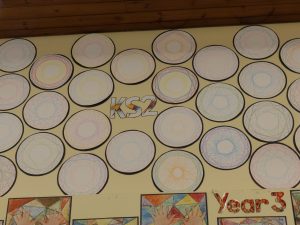 A massive WELL DONE to all the children who auditioned or took part in our Grand Final held last Friday evening. It was a great evening with 23 acts performing to a packed audience . Children from every class in the school were represented with a range of talents on display from joke telling to Irish dancing and from singing to playing musical instruments. It was wonderful to see what a talented group our children at Canon Popham are. Thank you to the staff and PTA who ran the event and to everyone who helped in any way. We are delighted that over £870.00 was raised. This money will go towards providing little extras that the school budget is unable to support.

After a very closely fought contest the final result was . . .

A particular well done must go to the many Reception class children who showed off their talents to such a packed audience. They were very brave and did a wonderful job with smiles on their faces!
An enjoyable evening was had by everyone and we look forward to seeing what the children perform next year.

Every year our Year 3 children work with groups of children from Hungerhill School on the The CILIP Carnegie and Kate Greenaway Children’s Book Awards. The Kate Greenaway Medal is awarded for outstanding illustrations in a children’s book. There are a number of books shortlisted and the student from Hungerhill read the books to the children and then do a series of activities and workshops based around the books. This year our children attended a music workshop based around the book Julian Is A Mermaid by Jessica Love (which also happened to be their chosen winner).The were so successful in their workshop that Mrs Beggs, the librarian, asked our children to open the show with their warm up song as well as perform the song they had learned. The winner of the Kate Greenaway medal for 2019 was The Lost Words by Robert MacFarlane and Jackie Morris.

As part of their topic on water children in Year 1 and Year 2 produced some art work based around water which was then exhibited and sold to parents to help raise money for the RNLI.

Year 1 created pictures based on the work of Natalie Pascoe. 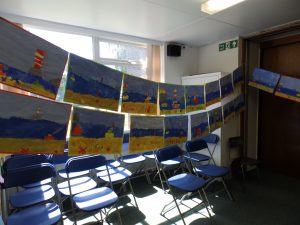 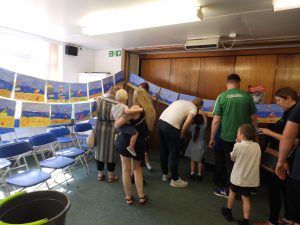 Monet’s ‘Bridge over a Pond of Water Lilies’ was the focus of our Year 2 Children. 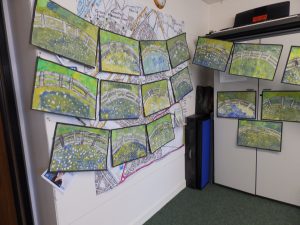 Overall the exhibition was a great success and the children managed to raise £130 to send to the RNLI to hep them in their work promoting water safety and in rescuing people in danger on or near water. Well done Key Stage 1!

Over the Easter Holidays Mrs Navas, Mrs Barratt and Mrs Brunyee came into school and redecorated our sensory room with an underwater theme. No area was left untouched as even the ceiling had some decoration. 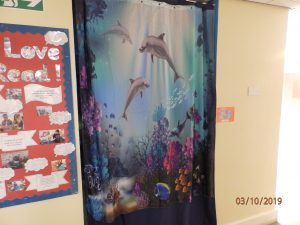 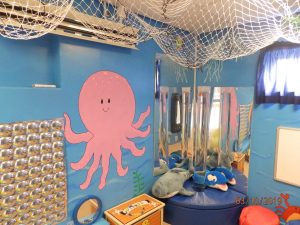 Some performers from the Northern Ballet Company came into school and did a workshop with Year 3 and year based on the performance of Puss In Boots. The children learnt some ballet positions and also practiced different ways to move like a cat. 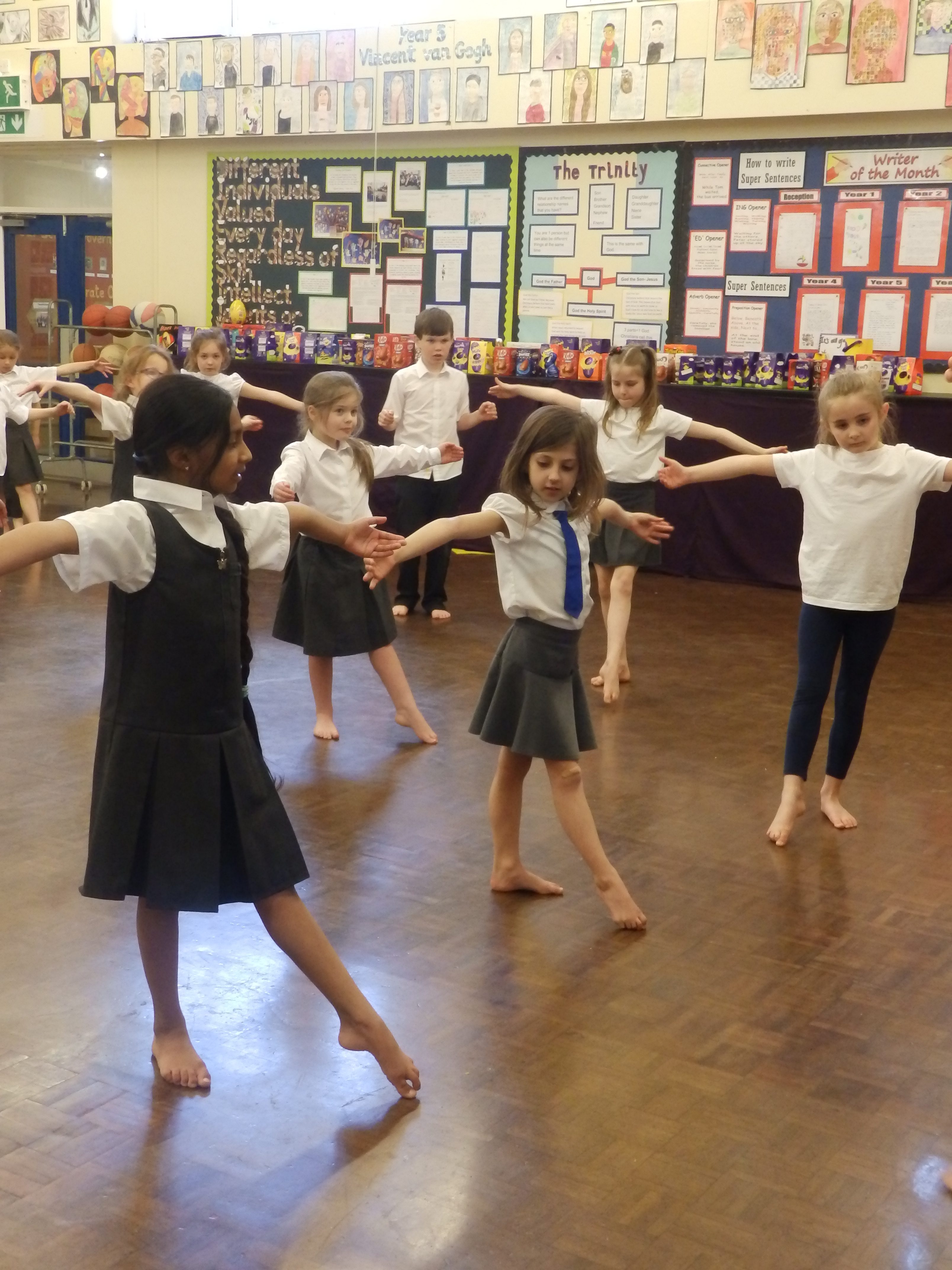 As the topic for the first term has been World War 1 and the 100th Anniversary of Armistice Day we felt as a school it would be lovely for the children to all produce some Christmas tree decorations along the theme of ‘Make do and Mend’ which have then been used to decorate the Christmas Tree in the hall at school. Each class had a different style decoration to make and they all did a fantastic job. Many compliments were received from visitors to the school over the festive period with some parents asking if they could buy the decorations. Well done!

As part of Canon Popham Primary Academy’s commitment to achieving it’s Artsmark we have  worked with the local community to create an art installation to commemorate the 100th anniversary of Armistice Day. The children and staff, as well as people from the surrounding community, all either wrote or sewed the name of a soldier from World War 1 onto a piece of green material and these were then stuck onto a backboard covered with poppies. In order to make it personal to the children the names of the soldiers given to them to write or sew shared their surname and it really made the children stop and think about the soldiers they were learning about. The remembrance board was used by the vicar as part of the Remembrance Day service before being displayed on the wall outside the entrance to the church and school. 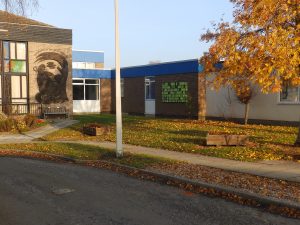 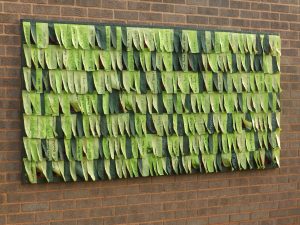 M & M Theatre productions came and performed A Little Princess in school for the children this week. The show has a strong anti-bullying theme and was very well received by the children.

All  the children in school have been involved in various arts projects through school. Each of our arts weeks has a theme for the morning sessions and another for the afternoon sessions.

The mornings theme was architecture and involved the children working in groups to produce a variety of different buildings. 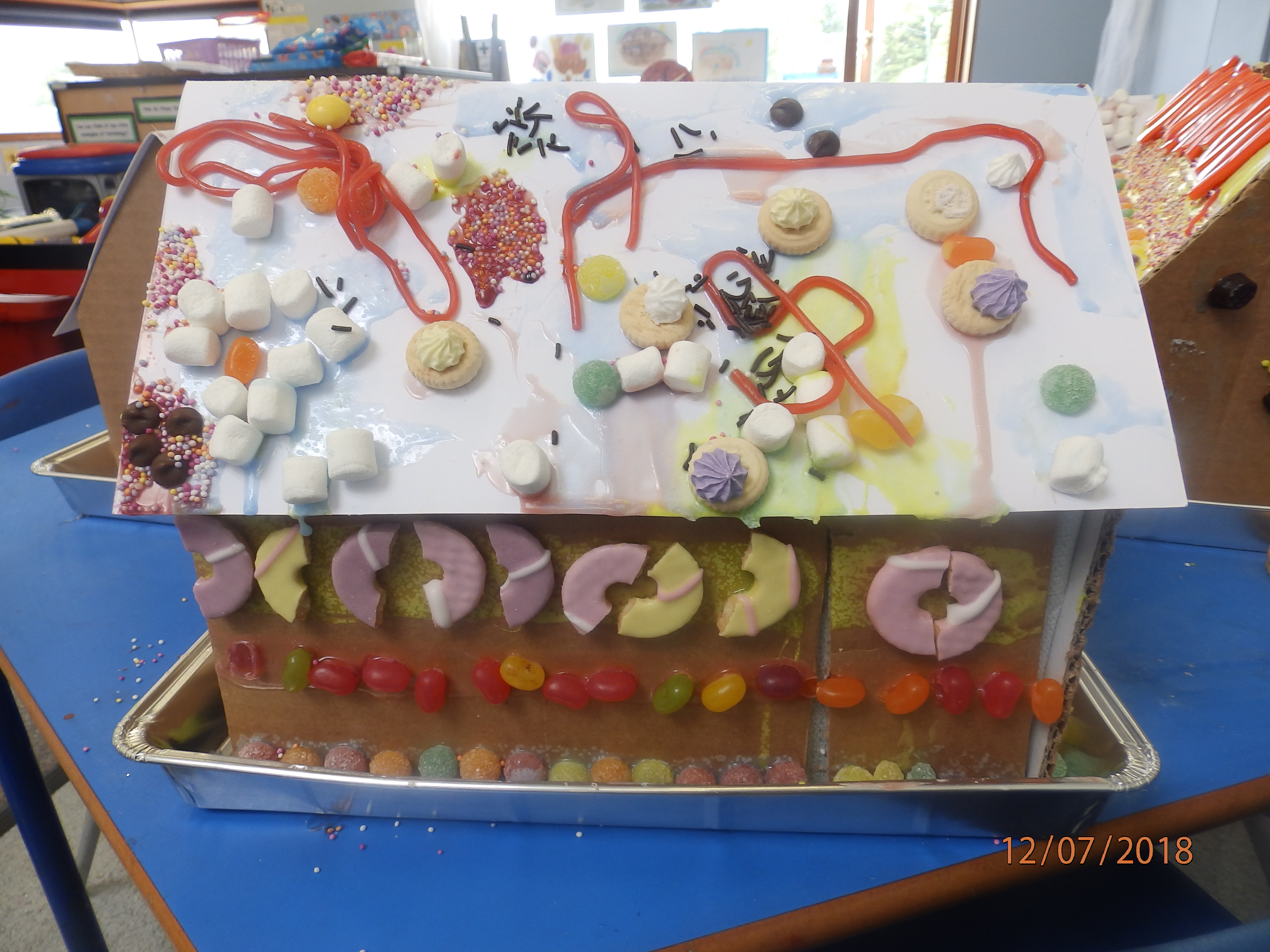 Nursery and Reception children had to produce highly decorated Hansel and Gretel style gingerbread houses. Didn’t they do a fantastic job? 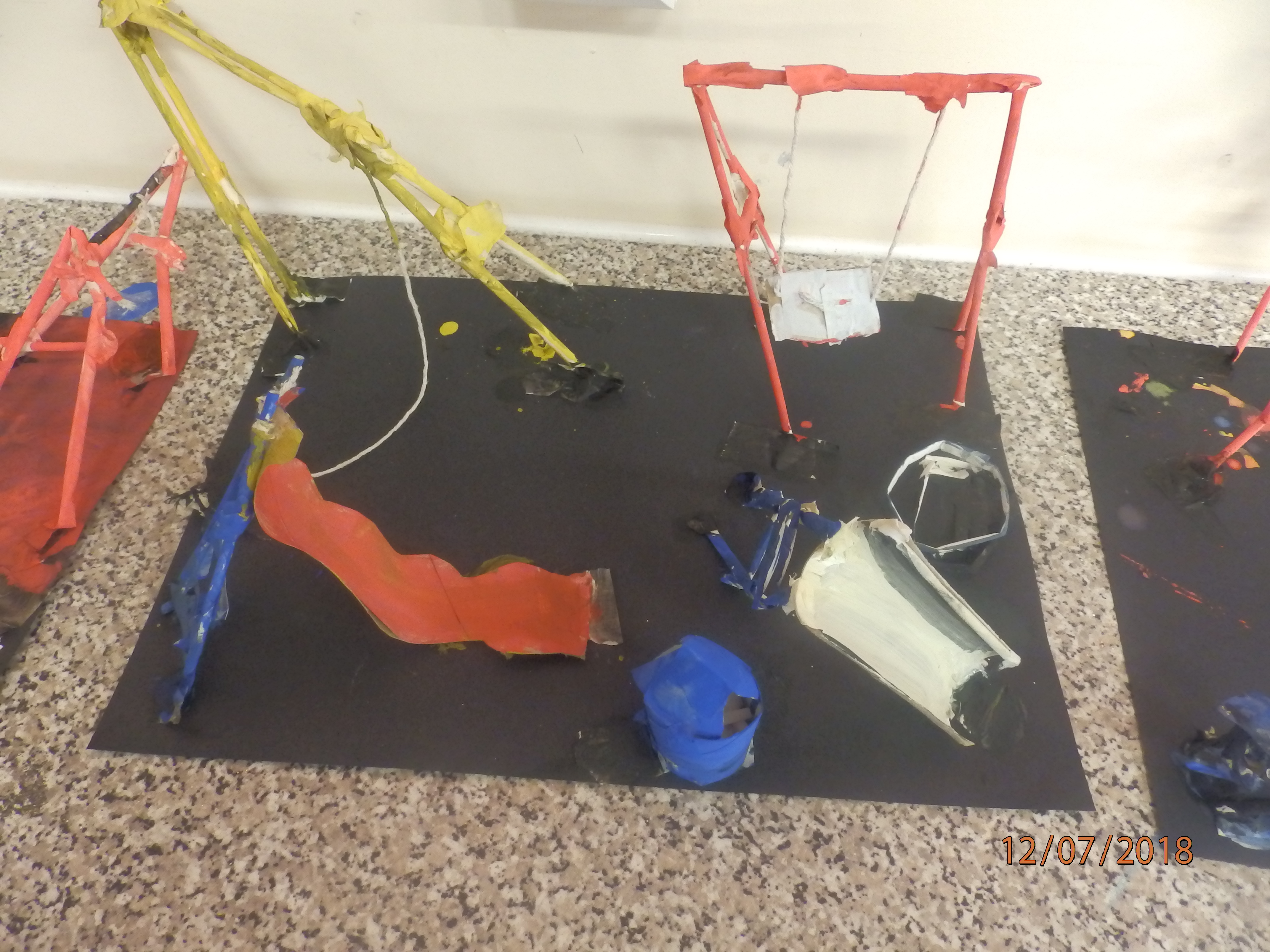 Key Stage 1 children also worked hard to plan and produce fantastic models of children playgrounds. They though carefully about what they would like in a playground and then how they could build it from card and artstraws. 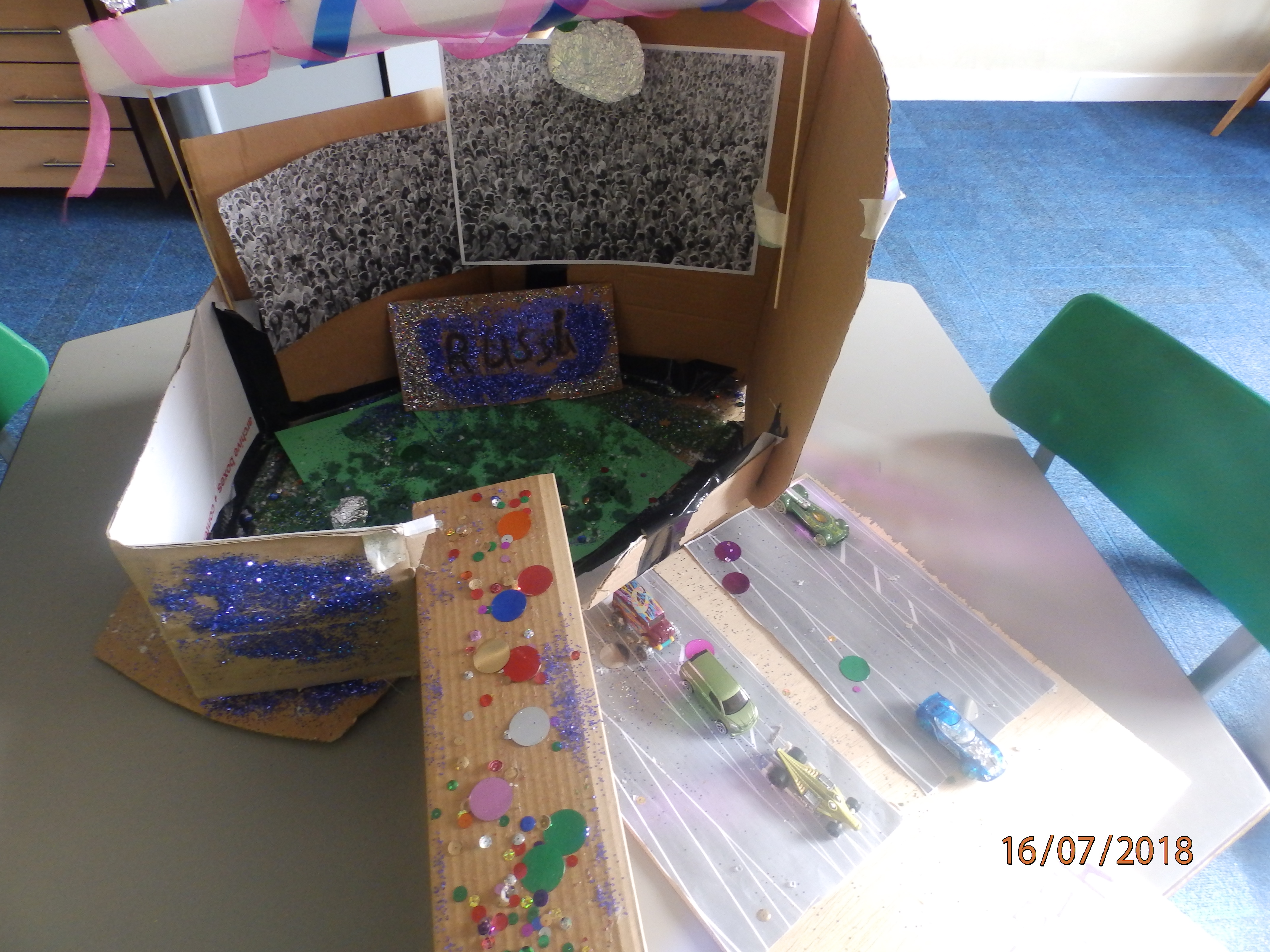 Upper Key Stage 2  The children in Year 5 and Year 6 also had to design, plan and build a model but theirs had to be a modern worship building. It could be for whichever faith they chose or a multi faith building to encompass all faiths.

In the afternoon session the children all had to learn about and produce a piece of work in the style of their class artist. this resulted in some fabulous pieces of artwork being produced and displayed around school.

All the children in Key Stage 2 had the opportunity to visit The Hub in Doncaster and look around the Fine Art Exhibition put on by the students there. The children were very impressed by the art they saw and even more so when in one of the exhibitions they got to produce some artwork themselves. 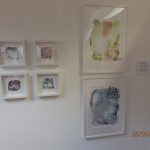 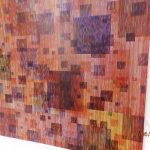